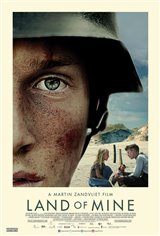 After Germany surrenders at the end of WWII, thousands of captured German soldiers are sent out to remove over 1.5 million mines placed by the Nazis on Denmark’s west coast. One of the groups, made up of young prisoners of war, is dropped at the seaside to complete this dangerous task.

There, they are met by the stern Danish army sergeant Rasmussen (Roland Møller). Each day, he sends the group of 14 boys into the sand dunes to search for mines. As they suffer more and more casualties, Rasmussen becomes conflicted with his hatred for the youths and finds his attitude towards them changing.