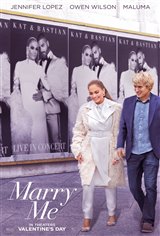 Music superstars Kat Valdez (Jennifer Lopez) and Bastian (Maluma), who recorded their hit duet "Marry Me" together, are about to get married in front of a global audience of fans during a concert. Just seconds before she goes onstage, Kat finds out that Bastian has been cheating on her with her assistant.

Charlie Gilbert (Owen Wilson), a high school math teacher whose wife left him several months earlier, is dragged by his friend Parker Debbs (Sarah Silverman) and his young daughter to the concert.

When a heartbroken Kat goes onstage, she makes a snap decision. She sees Charlie in the crowd and asks him to come up on the stage and marry her instead.

Based on the graphic novel by Bobby Crosby.