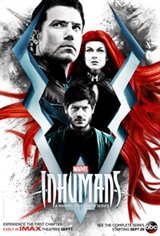 After the Royal Family of Inhumans is splintered by a military coup, they barely escape to Hawaii where their surprising interactions with the lush world and humanity around them may prove to not only save them, but Earth itself.

The ALEXA IMAX 65mm camera is a next-generation revolutionary 2D digital camera developed through a partnership between ARRI and IMAX for use by today's leading filmmakers working in the IMAX® format.