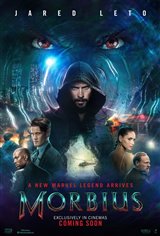 Dr. Michael Morbius (Jared Leto) is suffering from a rare blood disease and has spent years trying to save himself and others suffering the same fate by searching for a cure. He travels to an ancient land where he inadvertently infects himself with a form of vampirism. After having gone missing for two months, Michael returns to the world feeling as healthy as ever, discovering his newfound bat-like abilities.

However, they come at a cost, as he must hunt and consume blood to control and satiate the beast inside him. Willing to do anything to save a life, the line between hero and villain gets blurred for Michael as he struggles to come to terms with what he has become.