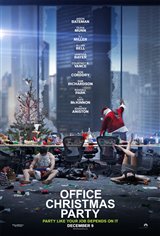 When hard-partying Chicago bank manager Clay's (T.J. Miller) CEO sister Carol Vanstone (Jennifer Aniston) threatens to shut down his branch, he decides to throw an epic Christmas party against her wishes in order to secure a huge client and save the branch.

He sets up the party with help from his co-workers, including Mary (Kate McKinnon) and Tracey (Olivia Munn), as well as his Chief Technical Officer, Josh (Jason Bateman), but the party turns out to be a lot crazier than anyone had anticipated, as it leaves the office in a state of chaos and destruction.