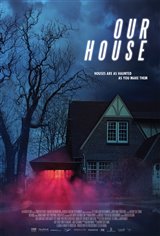 When his parents are killed in a car accident, science wiz Ethan (Thomas Mann) feels enormous guilt. He decides to quit a promising future at MIT, leaving college and his girlfriend Hannah (Nicola Peltz) behind in order to return home to care for his younger brother and sister.

Each day, he takes on the responsibility of raising his two siblings, but each night, he works in their garage on an invention he hopes will change the world: a machine that can generate wireless electricity. He gets more than he bargained for, however, when the device awakens the dead souls that haunt the house. As Ethan and his siblings try to make contact with their parents, a horrifying realization sets in: not all the spirits in their midst are friendly.
Director:
Anthony Scott Burns
Studio:
Elevation Pictures
Producer(s):
Karen Wookey, Lee Kim, Martin Katz, Ulf Israel
Cast:
Thomas Mann, Nicola Peltz, Percy Hynes White, Kate Moyer, John Ralston, Xavier de Guzman
Writer(s):
Nathan Parker