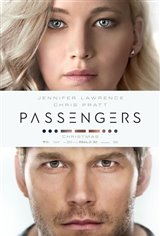 Starship Avalon is a spacecraft on a 120-year voyage to a distant planet known as Homestead Colony. On board are 5,259 people, suspended in time in sleep chambers. When there's a malfunction, a hibernation pod opens 90 years too early, leaving a single passenger, Jim Preston (Chris Pratt), the only one awake on the ship.

He's soon joined by another passenger — Aurora Dunn (Jennifer Lawrence) — a journalist who wants to write about outer space, while Jim is a mechanic whose skills have become obsolete on Earth. When the ship has further malfunctions, they have to try to save everyone on board.