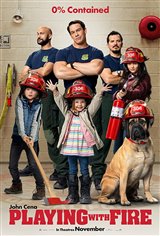 With no option other than to watch over the children until their parents can be found, Jake makes them promise to behave so the firefighters can do their jobs. Unfortunately, the children are undisciplined and quickly take over the fire depot with their antics.