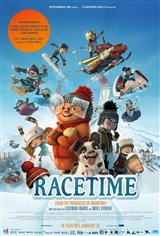 For the past five years, Frankie (a.k.a. Four-eyes) has won the sled race organized by the village children during the Christmas break. This year, the so-called unbeatable craft designed by the little genius will be driven by Sophie. She’ll face off against Charlie, the athletic cousin of Zac, a lonely and pretentious newcomer who resides with his grandmother.

After a neck-to-neck descent, Sophie’s speedster disintegrates when crossing the finish line. Refusing to give the cup to the deceitful Zac after discovering that he sabotaged the sled, Frankie demands a rematch. Zac agrees, but on the condition that Frankie builds a new track in an impossibly short time. When Frankie and his friends succeed in this challenge, Zac realizes his opponent is not to be messed with.