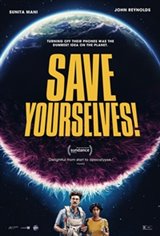 Jack (John Reynolds) and Su (Sunita Mani) are a stereotypical Brooklyn couple who feel bogged down by the pressures of long work hours and dull, weekly routines. Like their friends, they're completely dependent on technology and unable to put down their phones. Worried that their mindless scrolling has impacted their connection to each other, when they suddenly get a chance to head to a friend's cabin in upstate New York, they grab it as a way to unplug from the outside world for a week, even if Su is immediately fired when she asks for vacation time.

Free from texts and push notifications, they are blissfully unaware when the planet is under attack from murderous pouffes, even when they spot one in the cabin and mistake it for a footstool. As the footstool keeps materializing around the house, strange events unfold, so Jack and Su flee the cabin and head back to civilization—or what's left of it.