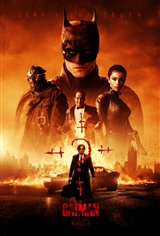 Set during Bruce Wayne's (Robert Pattinson) early years, as he tries to figure out exactly how to be Batman.

When a man is killed, his face is completely duct taped with the message "no more lies" written on top. Police are called in to investigate, but a greeting card, written in riddles, is left at the crime scene for Batman. As more crimes take place, more letters are left for Batman. Edward Nashton a.k.a. The Riddler (Paul Dano) is behind bars, but as it turns out, he's still bringing havoc to the city of Gotham.

To combat the evil brought on by The Riddler and Oswald Cobblepot a.k.a. The Penguin (Colin Farrell), Bruce Wayne heads down a path of vengeance.