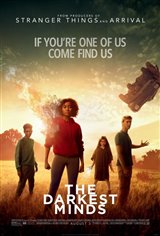 After a disease kills nearly all of the world's children, the last few survivors gain extraordinary powers. The adults, fearing the possibilities of what these children are capable of, round up everyone under 18 and send them to be interred in camps.

Ruby (Amandla Stenberg) is one of the survivors, but rather than be imprisoned, she and a small group of other youngsters try to escape being imprisoned by a government they don't trust.

Based on the book by Alexandra Bracken.