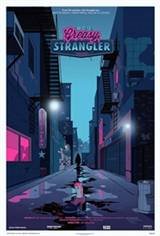 This Los Angeles-set tale follows Ronnie, a man who runs a disco walking tour along with his browbeaten son, Brayden. When a sexy, alluring woman named Janet comes to take the tour, it begins a competition between father and son for her attentions.

It also brings about the appearance of an oily, slimy, inhuman maniac who stalks the streets at night and strangles the innocent-soon dubbed "the Greasy Strangler."