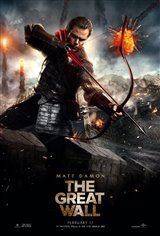 European mercenaries William Garin and Pero Tovar (Matt Damon and Pedro Pascal) and their group are attacked by an unknown monster while searching for black powder in Ancient China. After the attack, they are taken prisoner by Chinese soldiers, who are part of a secret military sect. Soon the mercenaries learn that they must team up with the soldiers, including General Shao (Zhang Hanyu), to fight off an attack by ancient monsters and ravenous beasts on the world’s most iconic structure — the Great Wall of China.

Every 60 years, the creatures rise from the nearby Jade Mountain to devour humans and everything else in their path. As William battles them and tries to protect the Great Wall, he discovers the mystery behind the fortress and finds himself on a journey toward becoming a hero of the times.