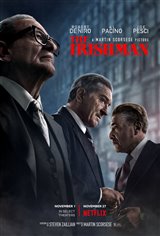 In 1950, truck driver Frank Sheeran (Robert De Niro) meets Philadelphia mobster Russell Bufalino (Joe Pesci), who takes him under his wing. A veteran of World War II, Frank is unable to separate his combat experience from civilian life, so when he's hired to do strong-arm jobs he has no problem with the violence involved. He's soon promoted to hit-man, or in mafia slang, "house painter," due to the blood spatter left behind when someone is shot.

After Frank has worked for Russ for several years, Detroit-based union leader Jimmy Hoffa (Al Pacino) hires him to be his bodyguard and right-hand man, at Russ's recommendation. The president of the Teamsters union, Hoffa faces threats from other gangsters, as well as politicians, including the Kennedy brothers. While working for Hoffa, Frank continues to work for Russ's mob, which leads to Frank's loyalties and principles eventually being put to the test.

Based on Charles Brandt’s 2004 non-fiction book I Heard You Paint Houses: Frank "The Irishman" Sheeran & Closing the Case on Jimmy Hoffa.