The Man from Toronto 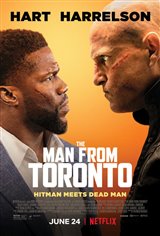 When the world's deadliest assassin, known as "The Man from Toronto" and New York's biggest screw-up (Kevin Hart) are mistaken for each other at an Airbnb rental, they're forced to team up.

Filmed in various parts of Ontario including Toronto, Brampton, Milton, and Hamilton.