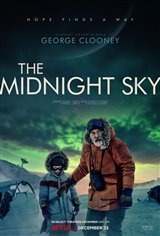 Augustine Lofthouse (George Clooney), a scientist located at a Space Station in the Arctic, tries to contact Sully (Felicity Jones) and her crew of astronauts, including Mitchell (Kyle Chandler) and Adewole (David Oyelowo), to warn them of a global catastrophe. The astronauts were sent out to look for another planet that would be able to support life.

Augustine believes he's the only one left alive on Earth, until he finds a little girl named Iris (Caoilinn Springall). He decides to take Iris along on a trip through the blizzard conditions to find a stronger antenna that he believes will be able to reach the astronauts, before it's too late.