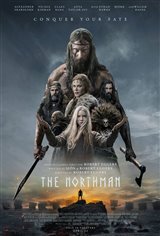 When his father, King Aurvandill War-Raven (Ethan Hawke), is murdered by masked warriors sent by Aurvandill's brother Fjölnir (Claes Bang), young Prince Amleth escapes and is raised by a band of Vikings.

Fjölnir marries his brother's widow, Queen Gudrún (Nicole Kidman), who is Amleth's mother, and they go on to have a son, Gunnar. Once grown, the prince (Alexander Skarsgård) goes to great lengths to seek justice for the murder of his father.