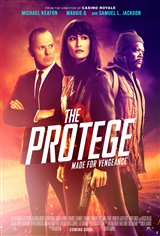 When Anna (Maggie Q) was a child in Vietnam, she was rescued by professional assassin Moody (Samuel L. Jackson) after her parents were murdered. Moody found her in a closet holding a gun, having killed a room full of her captors. He takes her under his wing and 30 years later, they still make a formidable team.

Anna also owns an antiquarian bookshop in London, England, where she meets an older customer named Rembrandt (Michael Keaton). When Moody asks her to track down a man for him, she puts out inquiries. Soon after, Moody is murdered in his home in England, the target of a professional hit. Anna goes on a search to find the man responsible and discovers Rembrandt is also an assassin. They form an uneasy alliance in order to track down the killer and avenge Moody's death.