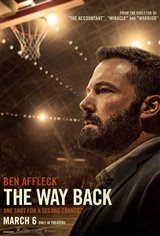 Former CIF champion basketball player Jack Cunningham (Ben Affleck) has spent years trying to drown his sorrows in alcohol. Although he was once a star player, he walked away from the game when he realized his father didn't love him — he only paid attention to him because of his skill.

Jack's addictions have cost him his marriage and triggered an unspeakable loss. However, because he was the Player of the Year from 1993 to 1995, his alma mater calls him up out of the blue and asks him to coach the school's basketball team, which hasn't made the playoffs since he played on it.

He reluctantly agrees, but once he starts coaching the students, he begins to believe they have what it takes to make their team successful, if they can get focused and trust themselves.