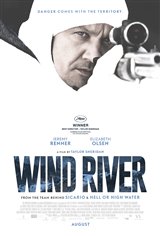 U.S. Fish & Wildlife agent Cory Lambert (Jeremy Renner) discovers the frozen body of a young Native American woman in the rugged wilderness of the Wind River Indian Reservation. She turns out to be the best friend of his teenage daughter, who died a few years earlier under mysterious circumstances. Although the tribal authorities get involved in the investigation, the FBI also sends in rookie agent Jane Banner (Elizabeth Olsen).

Completely unprepared for the harsh winter, Jane first has to borrow warm clothing from Cory, who never cleaned out his daughter's closet. Out of her depth in the wilderness, she enlists Cory to help her unravel the mystery behind the woman's death.