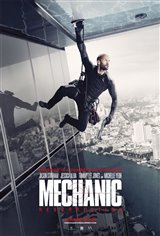 Jessica Alba is the best part of this movie. Strathom usually mediocre in all his films but here, he is dull and boring. The fight scenes were poorly executed, the special effects like a B-rated horror flick and the dialogue exactly what you'd expect given the review of all the other parts above: childlike.

Jason Statham is really good at this genre and this type of character, he makes the film.

Really enjoyed this movie !! Thought it was better than Bond..

Lots of action. Ok. It came off as an audition for Bond films. 'Your assignment is to assassinate three people". The first in a Malaysian jail (sure!), the second was more accidental in appearance, the pool broke 73 stories over concrete. (Well it could happen), and he faked the 3rd and saved the girl. The fight scenes were manifold, he toppled them all, all 50 or so, that was the worst part. So. If we looking for a new bond, it's possible, but I'd like to put the new Bond in a more stately car. And have the nondescript face of a true spy.

Two GREAT looking stars who could use some acting lessons.

Well the popcorn was good. This movie was mediocre.

Anyone who thought this was an acceptable movie is a complete and utter idiot.the camera angles,shaky camera the dialog,the storyline.not a single thing about this was worthy of anyone wasting time on it.

Went to see this movie thinking it was about a rogue mechanic fixing vehicles by the side of the road only to find out it's about an assassin that falls in love with a hot chick. Pleasantly surprised.

Almost all the thrills and fun of a Mission: Impossible movie for a third of the budget. Not too shabby!

although all action flicks suffer from shots caught in too close, jittery framing, and blurred or over cropped, the abundance of kick-butter action here more than makes up for it, along with added gruesome brutality to satisfy anyone who wants to see all the baddies get their due, plus most of the scenarios have a nice kick of humour thrown in, too. this was more fun than either recent j.bourne or j.bond flicks, and the too dark suicide squad. worth the see, even if some scenes are slow, or save the damsel plot is a cliche. at least the girl kicks but, too.

What a waste of 10 dollars.should have flushed it down the toilet that would have been more fun to watch.this director really needs to take a course on how to shoot a movie...OMG what a waste of time.....

Let's face it, I didn't go for a great plot or brilliant dialogue. I was there to munch popcorn while I watched Jason Statham kick some serious butt. Not disappoint at all!

very much worth watching

Statham is back and better than ever!