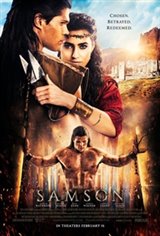 this film sticks fairly closely to the jewish scripture and does not take too many liberties with the biblical text although having Delilah as an "entertainer" to the prince is an addition to the plot but the 1949 cecil b demille film has Delilah as a close confidant of the philistine ruler too. this actor who plays Samson is definitely the most muscular of the actors who have ever played the film role. other than the brutal slaying of a thousand philistine soldiers by our mighty warrior, there is basically no reason why a young person can not see the film since Samson even reveals his secret to Delilah when they are both fully clothed and not in a bedroom scene. there is a brutal whipping before Samson pulls down the pillars of the temple -- the bible says that the philistines "had their way with him" so this could even mean that women sexually raped him before his demise but of course rape would never appear in a family film. there is a story in the jewish mitzvah that the philistines used him for breeding purposes while he was in prison and that perhaps goliath was his descendant but that is part of what is considered to be jewish "folk tales" and not the word of God as revealed in the torah

incredible and Fascinating. Sampson was a judge sent from God to cause judgment on the Philistines. True he was a savage and unbelievable strength. Read the bible. This is a very very close reality of what strength he had been given by God! Read the BIBLE its true to count! Excellent!

I liked all the movie!

decent movie, some stuff taken from what source? I guess imagination. not scripture but all in all decent.

This has got to be the dumbest movie I have ever scene. The script and acting were completely flat, and I felt little to no chemistry with any of the actors. It was obviously low budge, which I have nothing against as long as it has something going for it, but it didn't. I would have been more entertained just reading it out of the Old Testament.

This movie is action-packed and entertaining. It was somewhat consistent with the Biblical narrative, but not entirely. I realize that in order to make a full -length film out of two small chapters in the Bible, details must be added, but what I am wondering is why some of the details that ARE present in the scripture's text were left out or changed. Samson's first wife tricked and betrayed him in the Bible and was not innocent like the movie depicted. Her father later gave her to another man..not the Philistines ruler, as the movie portrayed. In the Bible, Samson knowingly went to a Philistine prostitute for her services and left in the middle of the night, picking up the posts of the city gate and moving them to the top of a hill. He was not confronted by the Philistines at that moment (as seen in the movie) because although they had heard he was there, they had not planned to attack him until he came out the next morning. Delilah was NOT living with the Philistine rulers before she met Samson. In the Biblical narrative, they confronted her and bribed her to beguile him AFTER they found out he had fallen in love with her. She took the bribe and was relentless in her attempts to get Samson to tell her the secret of his strength. He became well aware that she was untrustworthy well before he finally gave in to her and revealed the secret of his strength. Every time (3×) he gave her a false explanation of how he could be subdued, she immediately put it to use on him and led the Philistines in to attack him. He knew she was with his enemies, but he was so addicted to her and proud, (thinking that even if he broke his vows he'd still be able to defeat whoever she sent to subdue him) that he gave her what she wanted. An opportunity was missed here to expose how the power of sexuality, misused, can seduce someone to ruin themselves willingly.. a message our culture needs to see. Can a man scoop fire into his lap and not be burned? Pro