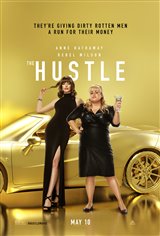 It was okay. Few laughs and I don't make movies. I probably won't ever either. On that merit, it's better than I could do

Rebel Wilson is amazing. For those of you discussing her weight, Look at yourself in a mirror. It's not for you to discuss. She's a great hilarious actress regardless of the fact that shes "100 lbs" over weight (which is an extreme over exaggeration).

I watched this and could not believe how bad it was. How this is the work of professional film makers. Let's start by remaking (badly) a 30 + year old movie. Now let's cast a woman who is more than 100lbs overweight. Now let's remove all entertainment value from the movie. I walked out before the end, yeah it is that bad, Wow

My Granddaughter took me to this as a girls night out. I was shocked to see how obese Rebel Wilson is. How we have come from beautiful Actresses like Lynda Carter and Olivia Newton John to this ? The film turned out to be a remake of a Steve Martin movie from the 1980's that I have in my Dvd Library. If I knew this ahead of time I never would have gone to see this Stinker, it was just not funny.

Comedy bits that were the most funny were ruined when watching the trailer. The humour seemed forced by the actors. This story line has been done to death. On a lighter note, it was nice to get out for the evening with great company. Gees, even the theatre only had three couples including myself and my partner!

We watched this and 30 minutes in realized it was a bad remake and walked out. We asked the Manager for a refund and got attitude that we should have known it was a remake. Save your Money and don’t waste your time.

save your money, watch the original instead of this terrible remake

Anne Hathaway is the only redeeming feature of this film. Watching Rebel Wilson made us skip dessert and put in extra time at the Gym. We watched this as a girls night out, this is just a remake of a much better 30+ year old film. Then again...if I gained 100+ pounds maybe I would get to be in a movie too.

Wow !! so awful we walk out before it was over. They should really have to announced it is just "Dirty ...." remade with a Woman and a Land Whale.

The movie was slightly entertaining. I had a few laughs and found some of the attempts at humor unnecessary. It was good to see after a long day of work and not wanting to think about anything serious. Would I recommend it to a friend - probably not. Would I buy it as a dvd to add to my collection - again probably not.

zero stars...the board forces 1 star so subtract one from my review. rebel is just plain awful, so is the plot. stay away from this one, unless you hate your time and money

yet another rebel wilson stinker. they just keep cranking these out for the land whales to have a hero

I wanted something light, but this was just too heavy. Rebel Wilson really weighs this one down.

Save your money...bad acting bad film.

Very entertaining flick. If you've read these other reviews, you'll know this is a remake of Dirty Rotten Scoundrels, but with the genders reversed. Realizing that kinda ruined the ending for me but I still enjoyed the movie. If anything, it was fun to see how the two women leads made the roles work for female con artists. This isn't a serious heist movie, but some light and fun entertainment.

A good bit of fun .Rebel Wilson is always awesome in whatever she does . It's a remake ,but whatever it was funny .

A remake of Dirty Rotten Scoundrels! So if you have seen that movie, don't go, it's the same story line. They should inform the public that it's a remake!

Disappointing. Did have a few laughs but I thought the cons would be somewhat realistic . Reached a point of just plain stupid, & stayed there.

Anne Hathaway’s accent was incredibly annoying throughout the movie. Had the potential to be a good movie, bit kind of fell flat

Should net Hathaway another Oscar. 5/5

Way better then I thought it would be!

If Hollywood is going to make a remake of Dirty Rotten Scoundrels , they really should have used two male actors ( Ryan Renolds, Tom Cruise etc.) and maybe spiced up the dialogue to fit with today's culture and Bam, now you have a great funny movie. If only Hollywood would get off it's fat butt and use their imaginations. It's not that hard.

Hustle is a remake of Dirty Rotten Scoundrels 1988 with Michael Caine and Steve Martin. Steve Martin was so winsome it was a loveable movie. That movie was in fact a remake of yet an earlier movie 1964 farce Bedtime Story, originally played by Marlon Brando and David Niven. Not a Brando fan myself so..... The thought of turning the script over to female leads is cute and why not. But I think it borrowed too heavily to be truly memorable. So I'd like more of this genre but original please.

Dirty Rotten Scoundrels, remake not funny but Steve Martin Dinner With Ruprecht Scene says it all this movie is a Stinker!!

My wife and I were looking forward to this movie but was disappointed. The chemistry just didn't work and it wasn't funny.

I chuckled once through the movie. Waste of comedic talent. Funny clips are laying on editing floor.