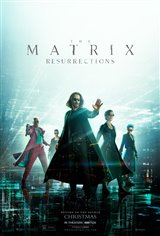 This is where cinema needs to go.

This is a game-changer, no question.

I loved Carrie-Anne Moss's performance. She is a badass.

The best part of this nostalgia was the interesting updates in the visuals. Occuring sixty years into the Matrix future, with a war between rival machines for energy, the analyst and agent smith fought each other using Neo and other humans as pawns. Again, the technological updates were the best part of the movie.

Save your money and if you don't want to ruin the last 3 experiences, don't watch the 4th. Zero originality and when they redo what they did in the past isn't simply not done as well. Horribly disappointing from beginning to end.

The most entertaining movie in years!

Pure trash, horrible fight scenes , the action was a mess and Neo was a sad situation

I think I need a pill to erase my memory

It was all around terrible Neo was sad as a hero and trinity was the only hero but the fight scenes and the action was a mess , 2 and a half hours of our lives wasted, pure embarrassment

The magic isn't there anymore. It felt way too forced.

Expect long line-ups, and not because of Co-vid.

I need a blue pill to forget this was ever made

As a fan of the original, all the sequels have just gone downhill, there is nothing new or original here, bringing back original characters in different actors, have I got to use flashbacks to try and keep you interested, just didn’t work, and yes he is the one

Wow, I cannot believe the low budget and shlocky plot of this hopefully the Final Matrix film. I was so disappointed by this movie, it totally lacks all the chemistry of Any of the former Matrix series films, even the worst of those "Revolutions. The acting was forced, pitiful and amateurish at best. I think it is time Keanu Reeves departs this venue for the rest of his film career. Reeves has a proven track record as a solid actor, but this film is a genuine waste of celluloid. I was appalled by the Comic Bookesque insertions of characters from past movies and the horrible Direction as well as the very weak performance of all title characters. It smacked of a hurried sloppy low budget less than B list SciFi movie. Really, really very disappointed at the hype surrounding its release and the end result which turned out to be a plate of Dog poo poo served up on a platter to all its Matrix series fans, and I am not eating what they are serving ! Do not waste your time. For all those Bond fans out there, This is the Defacto Matrix version of a George Lazenby movie, all title and no character.

This movie just did not feel like a matrix movie. Everything overall felt like a bad nightmare, the movie itself was just a big money grabber from the original franchise.

This movie was just bad overall, it had no purpose for the movie to exist in the first place. It went from glory to rock bottom.

The best MATRIX movie since the last one.

It was just okay. Totally a money grab. This movie didn't come close to being as good as the trilogy.

Probably the best "date movie" of the Holiday Season. It was very romantic, which was nice.

A little confusing and set in really confined settings for most of the film. Not as good as previous trilogy better than Eternals not as good as Spiderman.

It was an excellent movie. I loved it. Wish they will make a sequel again. Who are these looser who have reviewed the movie even without watching the entire movie?

This movie was done better before.

Another callback movie no one was asking for. Rates pretty high on the scale for such things -- lots of scenes and lines you'll remember, and some old friends turn up, too.