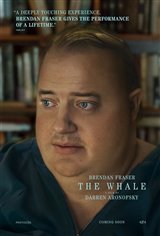 "The Whale" offers a lot of darkness. It’s a soaring character study of a man wrestling with the enormity of his regret, the duty of fatherhood, and the feasibility of goodness itself. It's a story about transformation and transcendence, one man’s odyssey into himself and out of his body, a journey through the depths of grief towards the possibility of salvation. The film is based on the play by Samuel D. Hunter. Any concern about the possible insensitivity of the title is quickly dispelled as well, once it's understand that Moby-Dick factored prominently into the show, both literally and thematically. Charlie and Ahab are not so unlike, underneath it all, both men caught up in the pursuit of a dream, intoxicated with the could-have-been, obsessed with the fantasy of another future. In some ways, "The Whale" is a hunt, a search to grasp the slippery nature of compassion, why we need it and why we push it away, when we can give it and when we can’t. But the audience also experience the thrill of it blooming in the course of the story’s construction. In the midst of re-examining trust and it's boundaries. And while there are many causes of obesity, a multifactorial disease affecting over 40% of Americans, the film drews a direct link in this case between excess weight and unaddressed feelings. Myths about obesity abound. Despite being an extremely common disease, it’s also highly individual in it's make-up, with aspects of genetic, metabolic, environmental, and psychological dimensions all contributing to the way it affects a person. Three million people are diagnosed with obesity every year, and yet the stigma against it remains rampant. This is reflected in the lack of honest representation of people with obesity in film and TV, and even more so when it comes to leading characters. Written by Gregory Mann