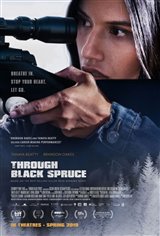 I didn't read the book which maybe allows me to take a little liberty with what I saw, especially the ending. Throughout the show I wondered if Suzanne would re-appear before the end of the movie. The appearance of Annie, or was it Suzanne, in the last couple of scenes led to my confusion. Annie had given the Moshuh cap to Suzanne who wore it in one of Jesse's shoots. So at the end, seeing it on one of the twins heads implied that Suzanne may have come out of hiding after Danny and Marius were killed. No?

Movie started strong , dragged in the middle but ended strong . Graham Greene only had a small role but was very good .

I have only seen the trailor. But, being an indigenous myself it looks good and the story or movie seems that it could be true to life.