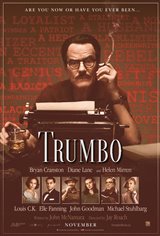 Nothing's going to keep this man from the Oval Office, no matter the reviews.

A decent movie about some of the nastiest actions of some of the nastiest people of that time. It was a little long but what can you do, there was so much to say. All of the "good guys" in this movie did a great job. But, it really is Cranston's movie and boy what a job of it he did. This is definitely movie you should not miss.

Not worth my time.

Brian Cranston does an outstanding job of portraying Dalton Trumbo during one the most shameful eras of the 20th century. The quality of this film is such that it feels as though you were there when the insanity of the Red Scare gripped our nation. The lives ruined and damage caused to innocent families is heart wrenching. A cautionary tale for those who would have us repeat those horrible events.

Brian Cranston does an outstanding job of portraying Dalton Trumbo and his life during one the most shameful eras of the 20th century. The quality of this film is such that it feels as though you were there when the insanity of the Red Scare gripped our nation. The lives ruined and damaged caused to innocent families is heart wrenching. A cautionary tale for those who would have us repeat these horrible events.

This is a well done movie but it's another shameful Hollywood work of fiction and a re-write of history. Trumbo wasn't a poor put-upon family man trying to do good. He was in fact a nasty and active Soviet stooge working to harm his country.

The story is real and riveting. Cranston and Mirren were amazing. Some icons were tarnished, new ones rose. You may spend much of the movie wondering what you would have been capable of doing if you were in their shoes.

Excellent film about a film maker with very USian ideology: the right to think freely.

Why does Hollywood continue to make these films which promote an alien totalitarian ideology ? Something is wrong here !

NOT a good movie. The producer & writers have distorted views of history !

The person who called a reviewer a ' right-wing zealot ' shows himself to be a typical left-winger. I noted that instead of attacking the message he attacked the messenger.

How much money has this pro-communist film taken in ? I note that it not listed in the top 10 !

If I could give it more stars I would. It’s a riveting movie, which everyone who doesn’t know about the dark days of the witch-hunt known as the House Un-American Activities Committee, should see. Brilliant acting by all -- a screenplay that Dalton Trumbo himself would admire. In parts, it is funny, scary, compelling and illuminating. This is what movies are all about. I loved it.

One of the best movies that I've seen in a long time. This movie is just as relevant now as the subject was in the 1950's. Just substitute Syrian refugees for communists and you'll see what I mean. We should never succumb to hyped up fear because the populace is being played to prop up or benefit a few!

I agree with the last reviewer: what Hollywood needs are more right wing zealots to tell us all how to live. Only then can we build a society where the best of us rule and free thinkers no longer exist.

Hollywood is still sticking to the party line. Dalton Trumbo was a member of the Communist Party which advocated the violent overthrow of the US Government, and all Democracies. In short Dalton Trumbo was a traitor to his country and all he received was several months in jail for his egregious crimes. He was the Communist's Commissar in Hollywood spreading communist propaganda. Yet, here is Hollywood today still pedling their mis/dis-information about the real nature of the 'Hollywood 10'. In my mind the US Congress should institute yet another HUAC and permanently rid Hollywood of these Leftists. Which one of the 'Hollywood 10' ( and others ) will they be glamorizing / lionizing next ? They seem incapable of making a film without politizing it with left-wing propaganda.

Great movie about a very disturbing time in American history. Worth the ticket price just for the scene with John Goodman. Helen Mirren also turns in an excellent performance as Hedda Hopper. Actually, the entire cast was incredibly good. We enjoyed the movie very much, and find that it sticks with us today. So good to see a movie with something to say that says it well when so much screen time is devoted to comic books.

Exceptional acting throughout. Very informative historically. Shows the extremes people of that time used because of fear of the unknown. WELL DONE!!!!

I felt that Bryan Cranston over acted a little, although I never heard the real Dalton Trumbo (I guess if I'd never heard Truman Capote, I'd think Mr. Hoffman was over acting too ). Anyway, I found the film interesting if not a little disturbing due to the convenient timing of it's political message. The world is a different place now and today's political correctness endorses the current witch hunt against anyone who stands against socialism and it's gradual but masked erosion of democracy. And to think I was a liberal most of my life.... that is until I stopped allowing myself to be misinformed.

A very interesting movie. I had vague knowledge of the witch hunt of the House Un-American Activities Committee back in the late 40s. I really admire Trumbo's conviction in not betraying his friends. Bryan Cranston is brilliant in this movie, he is so convincing and a great actor.