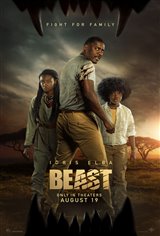 Recently widowed, Dr. Nate Samuels (Idris Elba) and his two teenage daughters, Meredith (Iyana Halley) and Norah (Leah Sava Jeffries), travel to a game reserve in South Africa. The reserve holds a special meaning to the family as it is the place where Nate first met his wife.

The family is joined by an old family friend, Martin Battles (Sharlto Copley), who is currently running the reserve and also happens to be a wildlife biologist. The family trip begins to take a turn when a bloodthirsty lion notices them. Now the group must fight for survival as they become increasingly aware of the beast's capabilities.