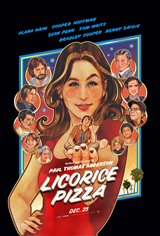 In San Fernando Valley in 1973, successful teen actor Gary Valentine (Cooper Hoffman) meets Alana Kane (Alana Haim), who's older than he is, and he develops feelings for her. When Gary has an encounter with hairdresser and film producer Jon Peters (Bradley Cooper), who's dating Barbra Streisand, he realizes how crazy showbusiness can be.

When Gary's feelings for Alana wane and he begins seeing other girls, she tries to make him jealous by hanging out with an elderly man. In this coming-of-age story about navigating one's first love, Gary and Alana find themselves chasing their dreams, falling in love as they grow up and find out if what they have going on is something special.