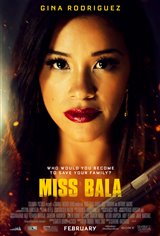 Gloria (Gina Rodriguez), an American from Los Angeles, travels to Mexico to visit her friend Suzu (Cristina Rodlo). As they're out enjoying themselves at a crowded club, armed men break in and begin shooting everyone in sight with machine guns. Gloria and Suzu survive, and when the shooters realize Gloria is American, they decide she's of more use to them alive than dead and begin using her to commit crimes by holding Suzu's life over her head.