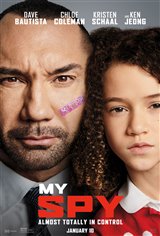 When JJ (Dave Bautista) is demoted following a botched mission in which he killed his targets instead of interrogating them, he is given one last chance.

During a routine surveillance mission, he's discovered by nine-year-old Sophie (Chloe Coleman), who turns her camera on him. Fearing another mission failure, JJ strikes a deal with Sophie to train her as a spy in return for not reporting his mistake. As he teaches her the ropes of being a spy, Sophie's charm helps give JJ a new perspective that not only finds a nicer person inside, but maybe a better spy as well.