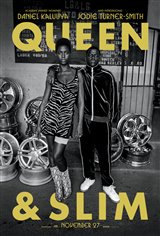 Costco worker Slim (Daniel Kaluuya) and criminal defense attorney Queen (Jodie Turner-Smith) go on a first date after meeting on Tinder. They hit it off, even though she tells him she picked him because he looked sad in his picture, which made her feel sorry for him. As they're chatting on the drive home, Slim forgets to put his turn signal on and is pulled over by a white police officer.

The officer takes offense when Slim makes a comment about how cold it is outside and angrily tells Slim to put his hands up and get on the ground. Queen gets out of the car to ask why Slim is being arrested. She tells the police officer she's an attorney and informs him she's going to take out her cell phone. However, the police officer reaches for his gun. In the ensuing chaos, the police officer is shot dead and the entire incident is captured on his dashcam video.

Rather than turn themselves in and face a bigoted police force, Queen and Slim go on the run and are dubbed "the black Bonnie & Clyde." Thrown together, the two begin to fall in love as they try to elude the authorities.