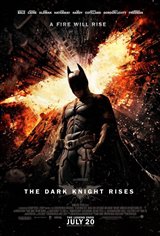 Eight years ago, Batman (Christian Bale) vanished into the night. He took the blame for the death of Harvey Dent, going from hero to fugitive, sacrificing everything for what he and Commissioner Gordon (Gary Oldman) hoped was the greater good. Millionaire Bruce Wayne is now keeping a low profile and is in a sick and fragile state, hardly leaving his home. Depressed and empty, it is unclear whether he can recover from his losses.

For a while, criminal activity in Gotham City was kept to a minimum due to the anti-crime Dent Act, and it seemed as if Batman had disappeared for good and there was no longer any need for him. However everything begins to change when a cunning cat burglar (Anne Hathaway) with a mysterious agenda arrives on the scene.

Things turn for the worse when a terrifying masked terrorist by the name of Bane emerges in Gotham City. He's powerful, ruthless, and has an army that will stop at nothing—it seems like Gotham is doomed to burn to the ground.

Batman must return to save Gotham City, however he's not in tip-top shape and the task is much harder than it seems. Can he save the day with the help of Police Detective Blake (Joseph Gordon-Levitt)? Will he escape capture? Will he have to sacrifice everything for the city he swore to protect?