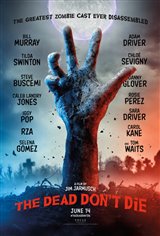 In the peaceful town of Centreville, three police officers investigate the mauling of townsfolk in a local diner. Unsure of what to make of the attack, officer Ronnie Peterson (Adam Driver) suggests that the cause of the attack is zombies. Despite initially seeming to be a silly notion, it soon becomes apparent that the town is under siege from the undead.

It’s up to Ronnie and his fellow officers Cliff Robertson (Bill Murray) and Mindy Morrison (Chloe Sevigny), along with the town’s local Scottish mortician Zelda Winston (Tilda Swinton), to band together with other survivors to turn back the tide against the zombie invasion.