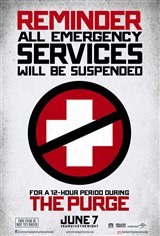 In a dystopian future society, a political regime called the New Founding Fathers of America tries to clamp down on rampant violence and crime by imposing strict laws.

As an experiment, they try something called The Purge, in which for 12 hours, once a year, all crime, including murder, is completely legal.