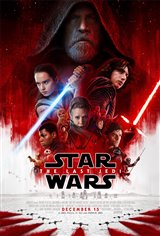 This movie was supposed to build the threat for the final install of the trilogy. But instead it destroyed everything that could have potentially been a plot thread to follow onto in Episode 9. RJ wrote Episode 8 like he was writing episode 9. He literally left nothing for JJ to work with. Which is probably why we ended up with the Emperor popping out of nowhere. Because who do you build a villain for a triology in the span of a single movie. You can't. So JJ re-used a familiar character that already had a proper setup and people know he's a big meanie. Whoever liked TLJ doesn't care about the direction of the trilogy. For if they did, they wouldn't like it. Because it literally undermined the concept of the trilogy by axing too many plot points and building none. This reminds me of how Flat Earthers deal with things. They don't build up their theory, they poke holes at the heliocentric/globe earth model. RJ pecked at Episode 7's plot lines until there was nothing left and called it a day.

Bad movie. Turned a Star Wars fan off Star Wars. Even Jar Jar didn't do that. I would rather watch The Phantom Menace where all the characters were digitally changed to be Jar Jar than watch this movie.

Ripped the soul out of Star Wars legacy.

This is a how to manual on how to kill a franchise. What a pile of hot garbage this is. So many plot holes, so much bad acting. 1/5 Only got 1 star because its Star Wars. crap.

Tries way to hard to be progressive. I actually liked the other two Disney Star war, but through this one I was just waiting for it to end.

One of the most politically correct pieces of garbage ever created. My what a fantastic franchise you've destroyed Disney. All in the name of a sick ideology.

Everyone who has seen all the Star Wars movies knows this is the worst since they have the others to compare it to.

Actually it's a 4.5 but I'm a star wars fan. I enjoyed the new turn in the force and enjoyed the until now uncharted capacity of the Jedi. The reluctant hero is reborn in Luke Skywalker. I'm now looking forward to where this series will take viewers. The key to a good movie is broken expectation with purpose. This movie gave me a lot of "What!!! No!!" It truly riled me up and had me look at things differently. Star Wars is BACK!

What was done to the characters is evident but it's sad they had to send the original Star War crew off in a disrespectful manner since Lucus was forced off the helm.

The hatred towards this movie is too strong. It wasn´t perfect, for example the feministic stuff was too obvious and forced but as a whole it was funny and creative.There are not many movies todays which are not either remakes of older stuff or adaptation of comic books or books. It takes much more creativity to build a world with characters from nothing than to take what someone else wrote and make a movie from it.

The decay and corruption of the media is everywhere and Hollywood is at the forefront. Star Wars is a excellent example of it. The cultural conditioning that has always been evident has greatly accelerated in the last decade and this indoctrination has been aimed at children in particular including young families. Those of us who can perceive this can't even enjoy the previously mostly harmless escapism of a movie but now the leftist agenda has taken precedence over entertainment. Star Wars as envisioned by its creator was pure entertainment unfettered with ideological driven politics, but since being virtually ousted from control, it has deteriorated into politically correct doctrine we see in this episode.

Force Awakens was alright, nothing revolutionary but I was at least hoping this movie would build up something unique on top of that foundation. Nope. The worst Star Wars media since Attack of the Clones and it was made infinitely worse because of the high bar that Rebels has set. This husk of Star Wars has the pieces but none of the heart... at least the cinematography and music were enjoyable.

An endless barrage of feminist pandering. Could have been good otherwise.

The writers decided to portray all the male characters as unredeemable, weak, foolish and or incompetent. The opposite was reserved for the female cast. Elevating one sex in such a disproportionate manner to diminish the other is a distasteful way to assuage their hurt feelings and irrational hatred that was a response to Trump defeating Clinton. Most people aren't aware of this but the point is that their hostility should have been expressed in other ways, not at the paying public and certainly not in a family movie.

woah, simply the smartest, most meta star wars movie yet.

My favorite and most interesting characters to me were, Kylo Ren/Ben Solo and Rey. Their very compelling story and unique characters, great acting, good chemistry were amazing. They were the ones I wanted to watch most, on the screen. I hope they are the main focus, with more screen time, in the next film. I don't think only one more film will be enough to adequately flesh out, cover and satisfactorily conclude their story. I wish they would make more films with their characters having the main and the majority of the focus. This could become one of the greatest love stories, in the Star Wars universe or any other, for that matter!

Looks like this bad movie is finishing with a 3 star rating. A pity.

Was too political for a Star Wars films. Killed off ****, but left leia. Too many Deus ex machinas. Overall worse than phantom menace

Princess Leia was relegated to the B team in this one and Luke Skywalker didn't fare much better.

Could have been great but went out of its way to disappoint.

I liked it for the first 20 minutes and then it went off on a tangent. Perhaps the people that did this should watch the previous shows so they can understand how the characters have evolved and how they would react to future situations in a similar manner.

As a die-hard fan it broke my heart to see this happen to my favorite sci-fi series.

WOW! People seem to either love it or hate it. I´m in the group of those who love it!

THE BEST REMAKE YET

Too disappointed for words.

This film trashes every thing good about star wars. Good bye to the jedi and welcome to Star Wars any thing goes film. You might as well put in the seven drawfs as a new jedi and then talk about global warming and pet safety and have Mikey mouse talk about that smoking is bad for you, and that all men are stupid. Good buy Star Wars

The Star Wars: The Last Jedi is the Best Movie of this Year. Unfortunately this movie is not for a mediocre person. That could be the reason for so many one star ratings.

Despite assertions that this movie has destroyed Star Wars, and was was awful, we have great news that “Game of Thrones” creators David Benioff and D.B. Weiss will be writing and producing a new series of Star Wars films. So take a pass on anything Rian Johnson does while looking forward to writers that can do this franchise justice.

Awful in most ways that matter unless one if below the age of ten. Perhaps the spammer has moved on to Rotten Tomatoes where the shows rating is sitting at 48% approval which is a much more realistic rating than the average here.

This movie single handedly has destroyed an epic franchise.